Swedish-born Karl van Cleave has lived and worked in many cities around Europe, in jobs ranging from police work to journalism. He is fascinated by emerging technologies, developing methods of communication, telepathy, pornography, philosophy, avant-gardism and the Marquis de Sade. His work is featured in ‘Clinical, Brutal… An Anthology of Writing With Guts’ (Clinicality Press 2010). He currently lives at home in London with his mother’s mutilated corpse.

His first solo collection of fiction, entitled Incisions, Collisions and Aborted Missions is everything you would expect from such a writer when paired with a publisher like this one: clinical, brutal and cutting edge. 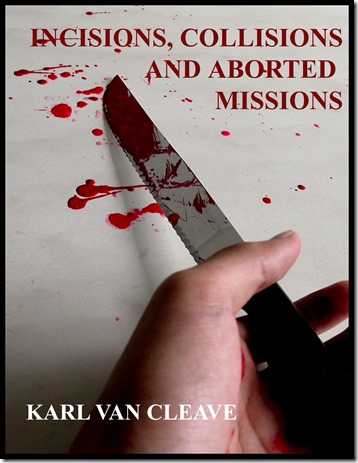 Incisions, Collisions and Aborted Missions is published today (28 February 2013) exclusively on Amazon Kindle. Other platform editions will follow later in the year.

With the six stories contained in ‘Incisions, Collisions and Aborted Missions’, Karl van Cleave proves himself to be a leading exponent of clinical brutality. Rendering the horrors of the every day in agonising, medical detail, van Cleave cuts through literary niceties to expose the core – and the gore – of the human condition. It isn’t pretty, but it is real. Very real.

The Sound of the Siren

I swear it was self-defence. It certainly wasn’t premeditated, not in any way. Not in a million years. But I can still see it now, like watching a film in slow-motion. The replays from different angles, like sports coverage when they show the same goal a dozen times using the footage from all the different cameras, and then slowed down, zoomed in, enhanced. In reality, I know I only have the on angle, the one I saw it from. But talking about it afterwards, re-imagining it, has made my mind reconstruct all of the different angles and play them back in my mind’s eye. Over and over. It’s torture. I try to leave it but I can’t forget about it.

Jamie and me, we were walking home one night. We hadn’t even been drinking or anything like that. Well, no more than a couple, no enough so that we’d been drunk. Not so that our judgement was impaired. Cutting down the back alleys behind the houses, that run parallel with the streets might not seem like an especially clever thing to do, but we do it all the time. We know our neighbourhood pretty well, and it’s a pretty safe area. It’s not like there are muggings and attacks or rapes or people getting knifed every night of the week. I can’t even think of a single occasion in the time we’ve been in the area, and we’ve lived here almost three years now. Over by the river it’s rough, and near the football ground, you wouldn’t want to be in the back streets round there late at night, but we live in a quiet suburb. Even the students are mostly quiet, and they might get drunk and lark about, but they’re not looking for trouble or anything.

On this occasion, we weren’t going to take the alleyway route at first, but Jamie needed to piss and insisted he couldn’t make it home. So we ducked into an alleyway and mindful of nettles and people’s back gates, Jamie found himself a safe spot and unzipped himself.I looked away, the only sounds being distant cars and the plash of Jamie’s jet of urine as it hit the wall or the ground. He let out a long sigh of relief.

“Hell, that’s better,” he said as he rezipped his fly.

“Well, you could,” he chuckled, “Besides, I’d hardly call this public.”

Just then, we heard the sound of something up ahead, scrabbling around in some bin bags that had been left out. We looked at each other. I was anxious. Jamie didn’t seem too bothered.

“Probably just a fox or a cat,” he said.

Then it showed itself: a big dog. It was dark, so I couldn’t tell if it was actually a stray or just loose. I don’t really like dogs, and definitely not big ones. People have always told me it’s an irrational fear, that there’s nothing to be scared of, that dogs are friendly. This one didn’t seem friendly to me. It fixed its stare on us and growled.

“Don’t worry,” Jamie said, trying to reassure me. “It won’t do anything.”

He was wrong. In an instant, it began running towards us, snarling and barking. The single lamp gave just enough light to show its teeth and the trail of slobber as it came straight at Jamie. He didn’t have time to react as it leaped at him and knocked him to the ground.

I shrieked and Jamie shouted as the creature began to tear into his shoulder with its teeth.

Panicked, I looked around. There was no time to get y phone out and call for the police or an ambulance. The houses remained in darkness, and no-one else was around. I spotted a small pile of bricks a few yards away, and found a broken half brick I could lift. I’m not strong and am slenderly built, so it was still heavy. I dashed over to Jamie, lying on the ground, blood glistening in the dusty tarmac. He was struggling and trying to fight it off, but the dog was big, strong and heavy and was standing on his chest and ripping him to shreds. I raised the brick and brought it down on the dog’s head. I felt its skull cave in. it gave a horrible anguished howl as blood sprayed from its smashed skull. And yet it continued to go at Jamie. I hit it again. And again. And again. Over and over, until eventually it slumped down and was still.

Shaking, I looked at Jamie. He was curled up in a foetal position. Blood was pouring from him. I called for an ambulance. He mumbled something inaudible and blacked out. I stared into the night, waiting for the sound of the siren.