Stuart Bateman’s debut novel, Grind, is published as an ebook via Smashwords today.

What had be wanted to be when he grew up? Adam struggled to remember. Probably an astronaut or racing driver, the same as any other kid. But reality had put paid to those vague ambitions early in life. Average in every way, the opportunities simply hadn’t presented themselves. He’d done well enough in school and sixth form college, before drifting his way to a mediocre degree at a mediocre university. In this respect, Adam represented the British middle class everyman.

Now, in his mid thirties in a low-level management job in a large corporation, Adam Johnson is at something of a crossroads. Single and terminally bored, he’s concerned that life is passing him by, while all around him his friends and colleagues are busy living and experiencing the highs, the lows and the dramas of life.

Grind is what happens when Generation X drifts into day-jobs. With the ennui of Michel Houellebecq’s Whatever and the bleakness of Michael Bracewell’s Perfect Tense, Stuart Bateman’s debut novel captures succinctly the emptiness of everyday existence in the early 21st century. 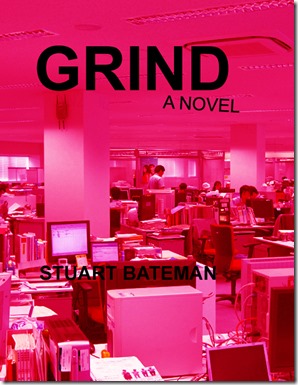 Amazon Kindle and print editions are planned for early 2015.