We make no bones about the fact Clinicality Press is a zero-budget operation run by a couple of guys with regular jobs. Rebellion and revolution isn’t about being bankrolled or even hitting a mass audience (and most ‘viral’ Internet phenomena achieve their status with silent financial backing). We’re all about keeping it real and doing it the hard way: no sell-out. That’s sticking it to the man.

Unfortunately, remaining true to the punk ethic means that sometimes things take longer than we’d like or necessarily anticipate. So when we announced our publishing schedule for the first half of 2013,we knew it was going to be a challenge, and sadly we couldn’t quite manage it. However, we’re not far off.

Christopher Nosnibor’s This Book is Fucking Stupid, set to appear in print in March, hit the shelves on 11th April 2013.  It looks great and contains material not in either of the ebook editions.

The print edition of James Wells’ Hack, scheduled for publication in March, is now set to appear in June. After some hellish difficulties with the pagination and formatting, we’re finally there. It will be available to order via Amazon shortly. We will be stocking it in our own shop in due course, just as soon as we can afford to carry new stock again.

We also said we’d  be publishing Christopher Nosnibor’s latest work,  a collection of essays entitled The Changing Face of Consumerism in April. It’s now good to go, and will be published as an eBook via Amazon on May 31st. The cover will look like this: 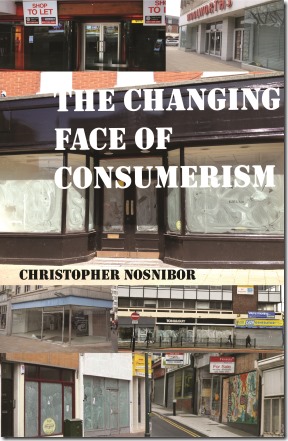 The print edition of Incisions, Collisions and Aborted Missions by Karl van Cleave has been put back from May to July / August, but we will be putting out another couple of short stories by different Clinicality authors as standalone free e-books in thee meantime, and we’ve got some more really exciting titles lined up for the Autumn, so keep watching this space.