Christopher Nosnibor’s latest literary assault takes his quest for literary self-annihilation to a new level and poses the question: is this the end of the novel?

Ben and Stuart are old friends. Having known one another since school, they’ve grown up together and remained friends into adulthood. But now into their thirties, their lives have taken very different paths, and they’re now very different people, leading very different lives, following different careers. Ben is a conformist: office job, moderately successful, and teetering on the brink of a premature midlife crisis. Stuart is a rebellious non-conformist, a lifelong student and a writer who sneers at the humdrum and derides ‘corporate sell-outs.’

However, true to form, Nosnibor shatters all semblance of continuity to forge a work that stretches what can be considered a novel to breaking point. Identities crumble beneath the weight of self-negating ideas and linear narrative dissolves in a corrosive tsunami of conflicting concepts and contradictory commentaries. This Book is Fucking Stupid is a challenging and labyrinthine work designed to confuse, bewilder and frustrate, as well an beguile, amuse and entertain. This Book may be stupid, or it may be a work of genius. Either way, it’s a book like no other.

Boasting a title that borders on the unmarketable and is guaranteed to be blocked by most retailers, This Book is Fucking Stupid is arguably the very definition of commercial suicide. The narrative form eschews literary conventions such as character development and linear plot progression, and instead focuses on a brief period of stasis in the lives of two friends who are growing apart.

Yet beneath it all is a thought-provoking work that challenges notions of authorship and the distinctions that separate theory, criticism, fiction and memoir, and amongst the rubble there lies a touching tale of friendship and anxiety in the postmodern age of late capitalism and information overload.

This Book is Fucking Stupid will be published via Smashwords as an e-book by Clinicality Press on 1st April 2012. 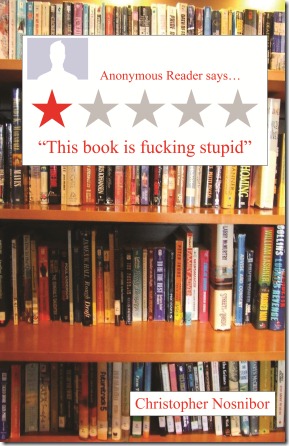